Last year I was granted a stipend to follow projects from September 2012 to May 2013 at the University of Wales, Newport. Except my photographic essay on The Legacy of Coal in South Wales I performed a research on the situation of photojournalistic agencies in today’s market. Below I publish the conclusion I came to, as it becomes topical by the news of Magnum Photos preparing a paid-for online membership platform. 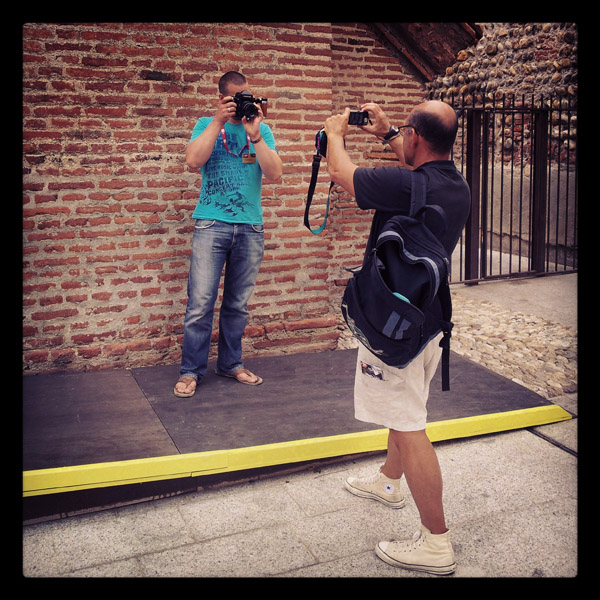 At the 25th anniversary of the annual festival of photojournalism Visa pour l'Image in Perpignan, September 2013. Photo: Kaveh Rostamkhani

Does the photojournalistic agency make sense in the 21st century?

Photo agencies rose in the 20th century out of the need of the market to manage the production of editorial photographic work and to sell them to publications. The main clients were illustrated and photojournalistic magazines which were also on the rise in those days.

But with the invention of television and introduction of televised news broadcasting in the 1960s, great portions of the advertisement market which had been sponsoring those publications moved away from their respective market. The loss of advertisement revenues which was proportionally accompanied with the dwindling public interest led to their decline. This development marked the historical starting point for the devaluation of editorial photography. In reaction, agencies evolved their business model then by opening to a new field and offering corporate photography productions. But this could not halt the process of devaluation of editorial photography that was gaining momentum with the rise of the internet and digitalization.

The foremost effect of digitalization has been the globalization of photography and moving it away from a formerly European and American ruled domain. Through this process, the number of photographers around the world has risen and led to inflation of imagery and the proliferation of the market. This has further accelerated the devaluation process by enabling the bypassing of the curatorial functions the publications used to have. It has pushed them into a crisis of larger scale as a result of the competing content becoming available on the internet at no extra cost.

The main issue this research project has been discussing is whether the photojournalistic agency concept makes sense in a market where the product is in a continuous and probably unsustainable process of devaluation. Indeed, the linear concept of agency as dealer and manager of photography production alone is obsolete and does not make sense anymore because the clients are in decline while at the same time the main asset – the photograph – is losing its monetary value.

In the 21st century, however, technical innovations have evolved the profession of photojournalist to a visual storyteller who has the possibility of using various content layers to tell multidimensional stories instead of only relying on photographs. This has also led to a higher sense of authorship with work featuring the personal style of the producers and also to higher consumer numbers due to its exclusivity.

Furthermore, the rise of Web 2.0 and social networks has had an enormous impact on the cultural behaviour of the target audiences and has thus led to creation of new presentation platforms and new currencies to reward artistic work. They have also generated new rivals such as citizen journalists and the microstock market. But a major achievement is that publishing is not a sole domain of media giants anymore.

From a photographer’s point of view, an agency can help with credibility, branding and giving exposure. Nonetheless, an agency has to satisfy a group of photographers who actually build its core asset. The result is that some very prominent photographers, among them James Nachtwey, Sebastião Salgado and Jan Grarup may serve as examples, have moved out of some of the most prestigious agencies to follow their own line of work, as their asset is not the good picture, but ethical integrity, credibility and their unique style as visual authors since long.

An interesting observation is that all of the world’s premier agencies have remained in the Euro-American domain, while visual storytelling and the market have been global since long. They prove that the agency concept makes sense, but only if it evolves and adapts constantly by finding new strategies to solve new problems. The scope of their services includes the traditional sales branch, publishing, organizing independent projects, establishing partnerships and promoting the works of their photographers.

Thus the world’s leading and successful agencies have responded to the second great wave of economic and behavioural changes, which came with the internet by transforming from sole image dealers to cultural hubs that value and endeavour to raise awareness about the importance of quality photography.

This said, the complete research is available as a PDF and if you are interested, please drop me an e-mail. I would also very much appreciate your comments on this.